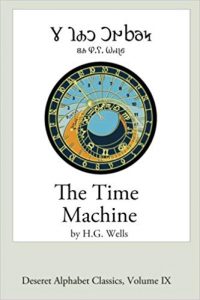 Herbert George Wells (1866–1946) was an English writer and social critic. He wrote numerous books on various topics and in various genres, but he is best known today for his science fiction. Together with Jules Verne, he is regarded as one of the fathers of the field. The Time Machine was Wells’ first major success. It is the first successful work portraying time travel via a scientific device and introduced the term “time machine.” Suffused with Wells’ socialist perspective, it is both a sharp criticism of the English class system and an riviting adventure set in the declining years of the human race. This edition is in the Deseret Alphabet, a phonetic alphabet for English developed by the University of Deseret in the 1850s and 1860s.

This edition was made available by John H. Jenkins Deseret Alphabet Classics.