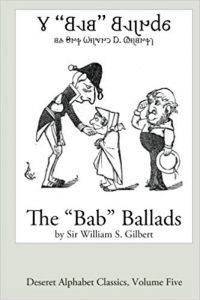 The “Bab” Ballads are a collection of light verse by Sir William S. Gilbert (1836–1911). In writing the Ballads, Gilbert developed his unique “topsy-turvy” style, where the humor was derived by setting up a ridiculous premise and working out its logical consequences, however absurd. The Ballads also reveal Gilbert’s cynical and satirical approach to humour. They became famous on their own, as well as being a source for plot elements, characters, and songs that Gilbert would recycle in the Gilbert and Sullivan operas. This edition is in the Deseret Alphabet.

This edition was made available by John H. Jenkins Deseret Alphabet Classics.